As our Birdquest tour of S.E. Mexico approached Jenny and I decided that we wouldn't drive to Heathrow, we'd take public transport and avoid the congested M25 and expensive parking. Then Storm Eunice came along and rather stirred things up!

First thing Friday morning it quickly became apparent that the slimmed down train service was in fact entirely missing. Trains were not getting through to Orpington and the usual ones that started there were all cancelled. So we were forced to drive to Heathrow and whilst the M25 was eerily quiet the parking cost was astronomical.

Getting airside was plain-sailing and our BA flight to Mexico City at 12.45 was still showing as on-time at mid-day, though by now many flights were being cancelled or delayed. Sitting at the gate looking across the airport it was difficult to see that Storm Eunice was having much effect, though the closest planes were visibly swaying gentle!

Then our flight was delayed and reports started coming through about 122mph gusts and constant 60mph+ winds and as the afternoon slipped by it looked increasingly likely that our flight would also be cancelled. But the winds died down and eventually we boarded the aircraft way out on the tarmac via a bus and we took off a little over 5 hours late. We landed in Mexico City and got to our hotel in the airport approaching 01.00. I've had better birthdays !

After a short nights sleep we headed across to the domestic terminal on foot and were soon on the Volaris flight to Cozumel Island. After a 2 hour flight we landed in bright sunshine at the small airport and reunited with our bags were met by our Mexican guide Rene Valdes and Hugo, our driver. After checking in at the Hotel Mexican at the other end of the strip near the cruise-liner terminal, we headed off to a local restaurant for lunch and to wait for the heat off the day to subside with the other 4 tour members.

Our Mexican birding began in the unlikely setting of the car park of the planetarium and then finished at an abandoned town development which saw us walking around a grid of roads looking at woodland where the houses should have been.  It might have been a bit strange but it was excellent for birds and we were soon watching some of the key targets.

I set off to look for Purple Sandpipers, timing my trip to coincide with the high-tide. After a wander across the harbour I made my way out to a likely-looking breakwater and was almost immediately rewarded with great views of at least 5 Purple Sands with one giving particularly close views.

Having achieved my goal fairly quickly I drove down to Deal and then north out of the town along the Ancient Highway to Sandwich. I soon found Grey Partridge - a group of 7- at what must be Kent's most reliable site for this increasingly scarce species. As I reached the golf course a Short-eared Owl glided silently past and I found that it was not alone, and neither was I! There were quite a few photographers about including a few sat right in the long grass which the owls were attempting to hunt over. Once again poor field-craft and too many photographers; an increasingly common scene.

I sat in my car and took a few photos before moving on to look for the Tree Sparrows at Dickson's Corner where I bumped into Rob and Virginia. A few minutes later Virginia flushed a Quail - one was seen a couple of weeks ago in the same spot by James Hunter and Barry Wright so perhaps a wintering bird? However, an escape can't be ruled out.....

After scoping the small flock of c30 Greater White-fronted Geese we had 4 Tree Sparrows and further views of Short-eared Owls before a splendid sunset slowly unfurled. 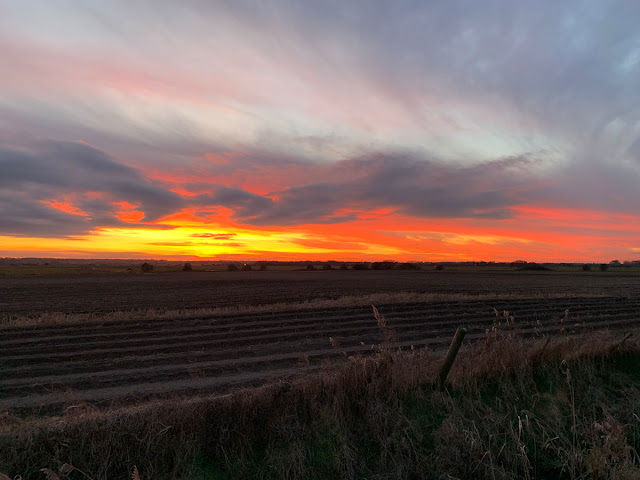 Jenny and I headed out to target a few species today on what was forecast to be a dry, sunny, spring-like day. We were not to be disappointed. In the morning we connected with Hawfinch and soon after found a superb male Lesser-spotted Woodpecker drumming and calling high in the canopy of a wood in the Canterbury "ring" woodlands. Plenty of commoner woodland species added to our enjoyment before we left around midday to twitch the long-staying Dusky Warbler at Fordwich. That proved typically elusive though we did get a couple of brief glimpses before heading to Stodmarsh.

At Stodmarsh we concentrated our time on watching from the Lampen Wall and stayed until well after dusk. Only 2 "ringtail" Hen Harriers came into roost - like everywhere else in Kent they are barely clinging on as a wintering species. At least 5 Marsh Harriers were present. Around 250 Fieldfare flew into roost - it seems a poor winter for them. We returned to the car to an accompaniment of squeals from Water Rails and a hooting Tawny Owl.

I spent the day on the east side of Sheppey; birding the Leysdown/Shellness/Swale NNR/Capel Fleet/Harty  Ferry area. A good set of classic winter species but no surprises. Highlights were the Shore Lark, Brambling, ringtail Hen Harrier and Barn Owl. Interesting to see such a large flock of Linnet in the Shellness area - at least 400 today. On the flip side its a really poor winter for Greater White-fronted Geese with just a few small groups seen and nothing like the hundreds of the previous winter.